Sponsored by: Board of County Commissioners Department

Update:
Multnomah County’s Board of Commissioners joined commissioners from Clackamas and Washington counties in selecting Akasha Lawrence-Spence to fill the vacant seat for State Senate District 18(link is external) at a Nov. 29 public hearing. Commissioners present voted unanimously to appoint Lawrence-Spence to fill the term of former State Senator Ginny Burdick, who resigned at the end of October to take a position on the Northwest Power and Conservation Council(link is external), after being appointed by Governor Kate Brown. 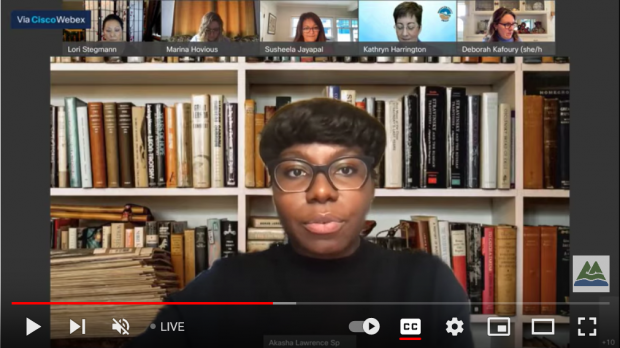 A screenshot of Akasha Lawrence-Spence addressing commissioners at the Nov. 29 virtual public hearing

District 18 includes portions of west Portland and Tigard. The district includes parts of Clackamas, Multnomah and Washington counties. Oregon law requires that a legislative vacancy be filled by county commissioners representing the district in which the vacancy exists.

Lawrence-Spence is the founder and principal designer of Fifth Element, a real estate development firm. She has served as an interim State Representative for House District 36 (January 17, 2020 to January 11, 2021) and on the Portland Planning and Sustainability Commission.

The process for appointing a replacement for a state legislator is for the former legislator’s political party to nominate three to five candidates that county commissioners select from. The state Democratic Party nominated Lawrence-Spence and two nominees who later dropped out of the running.

At the Jan. 29 hearing, Lawrence-Spence made an opening statement and answered questions from county commissioners before commissioners voted. Oregon State Senator Kayse Jama (District 24-Portland) spoke in support of the nomination during public comment.

Original release:
Following the resignation of State Senator Ginny Burdick on October 31, 2021, from the Oregon State Senate, Clackamas, Multnomah and Washington county commissioners will hold a joint virtual meeting on Monday November 29, 2021, at noon to interview candidates and select a replacement for the open position.

Oregon law requires that a legislative vacancy be filled by county commissioners representing the district in which the vacancy exists. Senate District 18 includes voters in Clackamas, Multnomah and Washington counties. The district includes portions of the cities of Portland and Tigard.

Since Senator Burdick was a registered Democrat, Oregon law provides for the state Democratic Party to nominate three to five residents of the district to be considered for the vacancy. The Democratic Party of Oregon has nominated:

The meeting will be held virtually via zoom and broadcast live at: https://www.youtube.com/multcoboard (link is external). Members of the public are welcome to attend and up to 20 minutes are provided for public comment. To sign up to testify visit: https://www.multco.us/multnomah-county/about-board-meetings/testimony. The meeting agenda provides time for the candidates to make statements and for commissioners to ask questions of the candidates.

For more information, members of the media and public may contact: